Virtual reality has made technological leaps and bounds since it first came onto the gaming scene. It keeps getting better and better as each new device is released. Ever since the release of the HTC Vive, virtual reality has become a booming business in the gaming world. Yet, for an experience that is meant to be entirely immersive, there are still some parts about it that are not. As virtual reality becomes more commonplace in gaming and recreation and as technology advances, there has been a growing desire to bring real-life objects into the virtual realm. That's where the Vive Tracker comes in.

What Is the Vive Tracker?

The Vive Tracker from HTC is a round, three-pronged accessory that can attach to other physical accessories so you can bring them into virtual reality with you using your HTC Vive Headset. The physical accessories are objects that you will use in the game. For example, there are tennis rackets for sports games, and there is a gun that you can use while playing a shooter or hunter game.

You can purchase these physical accessories along with a Tracker as a set, or you can buy them individually. The ultimate goal is to provide a more immersive and authentic gaming experience for Tracker users. Although not sold by HTC, there are third-party accessories developed especially for the Tracker to make it wearable. These accessories are typically bands that attach to the user's arms or legs in order to provide body tracking and more accurate movement data to keep the gaming experience as realistic as possible.

How Does It Work?

How Does It Work with Accessories?

How Does It Work on Gamers?

The Vive Tracker works with the two Vive Base Stations that come with the Vive Headset. The Vive Base Stations create a 15x15-foot 360-degree virtual space. The Base Stations are also collectively known as the Vive Lighthouse tracking system. The Vive Lighthouse tracking system produces infrared signals that pulse at 60 pulses per second. The Vive Tracker picks up on these infrared signals, allowing the Tracker to calculate its approximate position in the room, which is then converted into an accurate in-game position in order to create a realistic gaming experience.

When attached to an accessory, the Tracker gets basic information about that object, such as its shape and dimensions. The Vive Tracker then wirelessly shares this information this with the Vive system, and when the two are paired, the Vive system can track the physical accessory in real-time. Using the Tracker with a physical accessory such as a racket or a gun simulates the feeling of holding the objects displayed in the game. This can make the game-play feel more authentic for the user.

When a Tracker is located on the arm or leg of a gamer, it adds another layer of tracking to the game. More tracking means that the game can read more data about your location and movements. In some games, using a Tracker means that you can entirely forgo using a controller, allowing you to move around freely in your virtual space as you play.

How the Vive Tracker Changes Gameplay

Besides basic movements, the Vive Tracker allows you to experience feeling objects as you see them. If you're playing a virtual tennis match, there's nothing quite like swinging what seems to be a real tennis racket as you play. If you need to switch out a weapon in a combat game, nothing makes it feel more realistic than using a Tracker to assist in game-play.

The Tracker is a simple, yet complex device. It has an LED light that it uses to show its current status. Depending on the light shown, it can tell you whether it is charging, has a low battery and needs to be connected to the charger, or if it's in pairing mode. It has small sensors in front that receive the infrared lights emitted by the Vive Lighthouse Tracking System and respond accordingly. HTC Vive Trackers charge via micro-USB ports, just like Vive Touch Controllers. So you need not worry too much about collecting more charging cables.

You can expect to have a whole new gaming experience when you add a Vive Tracker to your set-up. You can expect to interact with in-game objects in an entirely new way. The Vive Tracker tracks your real-life movements more than a controller can, which can truly solidify the virtual reality experience for you. You can also expect a quick and easy set-up when you pair your Tracker to your VR headset, though we've found that the pairing process might take a few tries to work.

What Not to Expect

The Vive Tracker is somewhat of a novelty item, so what you shouldn't expect is that it will give you the most realistic experience yet. The Tracker and its accessories do not provide haptic feedback for the most part, though there are some exceptions. Haptic feedback is an immersive experience on its own and can be the difference between hitting a virtual tennis ball with your tennis racket and actually feeling the racket hit the ball or simply swinging the racket around in the air. If you're playing a virtual reality game, you might not want that reminder that you really are just swinging a racket around in the air in real life.

If haptic feedback is important to you in a gaming experience, the Vive Tracker may not be your cup of tea.

A Vive Tracker isn't exactly the most inexpensive item on the market. Purchasing a Tracker will set you back around $100 if you purchase it on its own. If you want to buy a special item along with it such as a plastic tennis racket or plastic gun, then the price goes up to around $150. If you already have a Tracker and would like to buy objects for use in-game, you can buy a Racket Sports Set for about $80. That will cost you almost as much as a Tracker itself.

The battery only lasts for about six hours, which is roughly the same amount of time that you can expect a Vive controller to last on a single charge. It might seem a little short, but you've got to take a break at some point. Luckily, it only takes about an hour and a half to charge back up. While you do have the option charge your Tracker with your computer, just know that if you choose to charge it that way, it could take up to three hours to charge fully.

One major downfall of using a Tracker is that you have to worry about what games it is compatible with because not all games have support for the Vive Tracker yet. However, there are quite a few games that are compatible with the Tracker. These include Duck Season, First Person Tennis, Goalie VR, Virtual Sports, Operation Warcode, and more. If using the Tracker is important to you, just be sure to check in advance if the game you want to play offers support. If the Tracker continues to grow in popularity, we imagine that more Tracker compatible games will be released in the coming years. 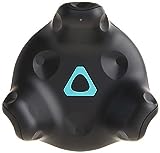 Bringing real-life elements into virtual reality makes gaming much more immersive by adding the extra element of physical touch and movement to a game. The Vive Tracker is on the cutting edge of technology, but since it's relatively new and there is not a lot like it on the market, it is lacking in certain areas. With the lack of haptic feedback and many games not yet having support for it, having a Tracker is not exactly a gaming necessity.

Despite the few issues that the Tracker has, it's easy to say that there is a major difference between the experience of pressing a button on a controller to pick up an object on the ground in a game and the experience of using your Vive Tracker to perform the action in real life.

If you're looking for a way to make your virtual reality gaming experience come to life, the Vive Tracker might be what you're looking for. However, if you'd rather not shell out the money for something that is more of a novelty item than a gaming necessity, you won't be missing out on a lot. Plus, the Vive Touch Controller is compatible with all the games already.