PlayStation VR is not only the cheapest headset around, but Sony's virtual reality device also boasts an amazing library of games—and we've compiled a list of the best ps4 vr games out there right now.

From the open world RPG adventure of Elder Scrolls V: Skyrim VR, to surviving the terrifying rollercoaster ride that is Until Dawn: Rush of Blood, there will be a PlayStation VR game that's right up your alley.

Image by InspiredImages from Pixabay

PS4 VR games are designed to be played using Sony’s virtual reality headset, PlayStation VR, which was released in October 2016. This works with the Sony PlayStation 4 video game console and gives you a totally immersive experience, making it feel like you’re inside the gaming world. PlayStation VR is a much cheaper option than its main rivals the Oculus Rift and HTC Vive, which both require top-end PC specifications to run. You can also leave your glasses on while wearing the PlayStation VR headset, unlike the Vive and Rift.

How Do You Play PS4 VR Games?

What PS4 VR Games Can You Buy?

There are already around 500 PlayStation VR games available to buy. You can find the best PS4 VR games in a whole host of different genres, including action, adventure, puzzle, RPG, shooter, arcade, fighting, racing, interactive, and simulation.

We have reviewed titles from several genres to give you an idea of what type of game is suited to you.

Where Can You Buy the Best PS4 VR Games?

The games are available from many online stores such as Amazon and Walmart. You can buy PS VR titles from as little as $10. If you’re on a tight budget and are happy to play second hand VR games, then you should look on notice boards, in-game exchanges, and on Facebook marketplace. You can also purchase a PlayStation VR bundle which includes one or more games.

How We Reviewed the Best PS4 VR Games 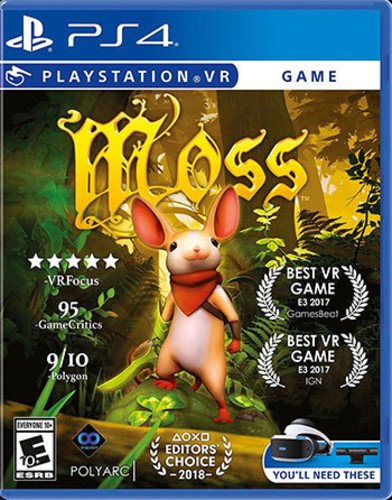 ​We extensively played each of the following products to bring you our unbiased review based on what the game offers, pros and cons, value for money, and where to buy.

​Overall Price Range of This Product

It pays to look around or use price comparison websites to find great deals for the game you want to purchase.

Skyr​​im VR, by award-winning developers Bethesda, is a massive scale open-world experience which ranks high among the best PS4 VR games due to its unrivaled depth and immersion. You can roam the lands and do pretty much as you please, using either the DualShock 4 or PlayStation Move controllers to control our prophesied hero, Dragonborn, on your epic RPG journey. If you're a fan of exploring huge worlds, battling bandits and dragons along the way, then this game is right up your alley.

​Polyarc’s Moss is easily the most charming addition to the ever-increasing library of PS VR games. You're a tiny little mouse named Quill in this virtual reality story-telling adventure, who sets out on an epic journey through an enchanted wood, battling villains, and solving tricky puzzles to rescue her uncle. This VR platformer is set in a beautiful fairy tale world and offers unique motion controls. It’s brilliantly chaptered, bringing you action and story-telling in equal measure.

​This is another highly rated title in our collection of the best PS4 VR games and one that will leave you feeling like a 'total badass' as you dodge bullets and bend time! Superhot VR is unique in the way that time only moves as you do, giving you the feeling of being a full-on action hero tasked with using a methodical approach to taking down your enemies through trial and error. It's a thrilling shooter and puzzler which brings a new element of cool to virtual reality gaming.

​DOOM VFR seamlessly transfers the brutal and fast-action of first-person shooter gameplay into virtual reality for a totally new and immersive experience. As a cybernetic survivor, you'll wreak havoc from a different perspective as the metal soundtrack powers through your headphones in this blood-splattering epic, which includes support for the PS VR Aim controller. Your skills are put to the test like never before as you battle against invading demons and attempt to restore order to the UAC facility on Mars.

Until Dawn: Rush of Blood

​One of the best survival horror games brings a whole new meaning to terrifying with its PlayStation VR spin-off. Until Dawn: Rush of Blood is an arcade-style shooter in an eerie theme park setting that will leave you squirming in your seat as it takes you on a rollercoaster ride of thrills, emotions, and scares. While you won’t need to make any tough choices in this installment of Until Dawn, you'll still be treated to the same frightening horrors you experienced in the original game.

​Farpoint is best described as a modern version of a classic arcade shooter and was the PS VR launch title for the release of the Aim controller. You enter the virtual reality world as a space marine on an alien planet, blasting a constant stream of hostile bugs using the Aim controller, which is gun-shaped with motion sensing and vibration feedback. This fast-paced game makes you feel as if you're right in the action and offers responsive combat against an alien invasion making it a must-play among the best PS4 VR games.

​If you're a real fan of the caped crusader, then Batman: Arkham VR is a must-play for you. In this first-person virtual reality experience you become the Dark Knight himself; fighting notorious villains and henchman, solving puzzles and reliving the troubled origins of the iconic crime fighter on the streets of Gotham. Arkham VR is quite simply the superhero immersion you've been waiting for and ranks at the top end of our best PS4 VR games list.

Robinson: The Journey has been one of the most talked about games available for PlayStation VR games and we can see why. The visuals are simply stunning and the environment feels alive as you explore a spectacular Jurassic Park-like world filled with prehistoric creatures and wildlife.

If you feel at home playing the role of a young boy wandering around with a pet T-Rex after crash-landing on an unfamiliar planet, you'll want to get this.

​PlayStation VR Worlds has so much to offer a headset owner with its five unique games, each with its own sense of immersion, bringing plenty of variety in one package. You can explore galaxies, swim with sharks, and fly down a motorway on a luge. But the best part of VR Worlds is most definitely the London Heist. The London Heist brings a great feeling of realism in London's criminal underworld as you reload your gun, duck for cover, and hang from windows using the PlayStation Move controllers.

​Battlezone is based the original game of the same name released way back in the 1980s on the Atari 2600 and in arcades. The series has now been revived for an immersive virtual reality experience, featuring campaign and cooperative modes where tanks go head-to-head in tactical and intense battles. If you're a PlayStation VR gamer who experiences motion sickness, you can climb inside your tank and blast your enemies on the battlefield without worry as the gameplay is slower than most other titles.

We have so much to choose from when it comes to PS VR games, with a library of around 500 titles and tons of new and exciting additions joining the extensive collection every month. There are fantastic games available to buy now, but PlayStation VR is still young and we expect to see more incredible releases coming our way over the next few years.

We have gone for The Elder Scrolls V: Skyrim VR as our pick of the best PS4 VR games on offer. The scale and depth of the game are massive and offers the most immersive PlayStation VR experience yet.

If you’re looking for a more terrifying virtual reality experience, then look no further than Until Dawn: Rush of Blood. It will guarantee a real scare for you and your friends.

Those who are looking for something different and love the art of story-telling should go on an adventure as Quill, in the brilliant Moss.